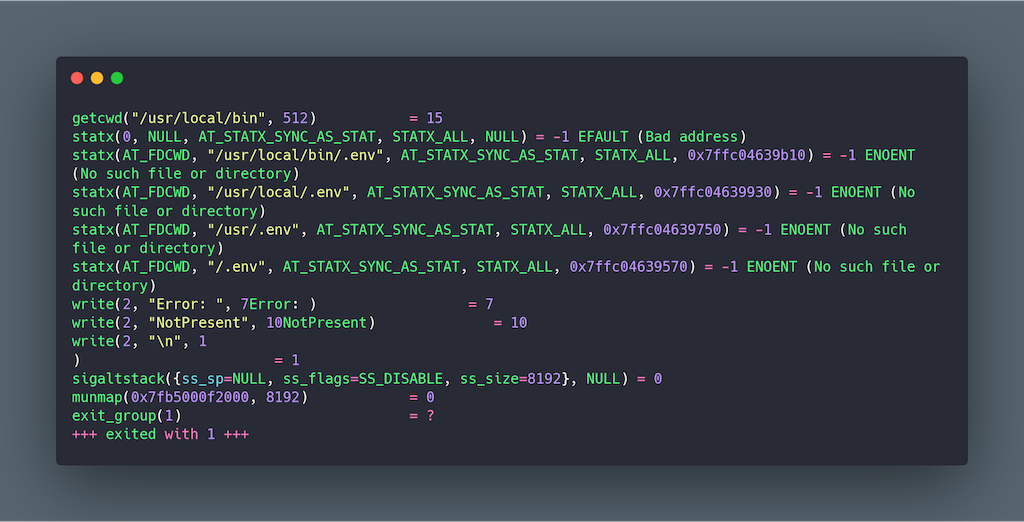 Today, a friend posted the following snippet in Slack:

The first guess was that they had deleted the docker image and forgot to rebuild it. That wasn't the case, leading me to dive into this cryptic error message that we assumed was some hidden Rust or Docker error. We weren't able to find any example of this error message for Rust or Docker online, so I knew this would be a fun challenge.

The first thing I did was to make sure the path to the binary was working, as it'd be silly if this wasn't working because /usr/local/bin wasn't in the container's PATH. I changed the last line in the Dockerfile from CMD ["shelflife"] to ENTRYPOINT ["/usr/local/bin/shelflife"]. The error persisted, which meant it wasn't a PATH error. Of course this couldn't be easy.

The next step in diagnosis was to get a shell on the container. That would typically be done via docker exec, but that only works on a running container, which we didn't have. To get around this, I changed the last line of the Dockerfile to ENTRYPOINT ["/bin/bash"], which makes docker run -it drop you into an interactive bash shell. This means I could easily see what was going on and run commands from inside the container.

Now that I had a shell, I navigated to /usr/local/bin/ and ran ./shelflife to check if there was any output docker was hiding. Unfortunately, there wasn't. I was at roughly the same place as when I started - a cryptic error message and no idea where it was coming from. At least now I was decently sure it wasn't not a docker issue.

I'd run into issues with dynamically linked libraries not being installed in the past, so I used ldd (List Dynamic Dependencies) to make sure all the dependencies existed. Everything looked fine, and I double-checked by manually installing the library packages for everything ldd said was linked. Everything was already installed, but the error persisted.

The last thing I tried was installing strace, a tool for tracing system calls, and running strace ./shelflife. This gave me a huge output full of system calls, but near the bottom was something that looked familiar, the text "NotPresent". Now I knew I was on the right path! The relevant output that got me to the final answer was the following:

There it is! Right before exiting, there's several checks for a .env file that all fail. This error didn't happen when run locally, because my friend already made a .env file. However, I never created one, and more critically, the Dockerfile never copied their version of the file into the image. Once we created a .env file and added COPY .env . to the Dockerfile, it started as intended! This wasn't an issue with Docker or Rust at all, but a library giving an unhelpful error message. We couldn't find any documentation of this online, so I hope this post might serve to help anyone else who runs into this issue!